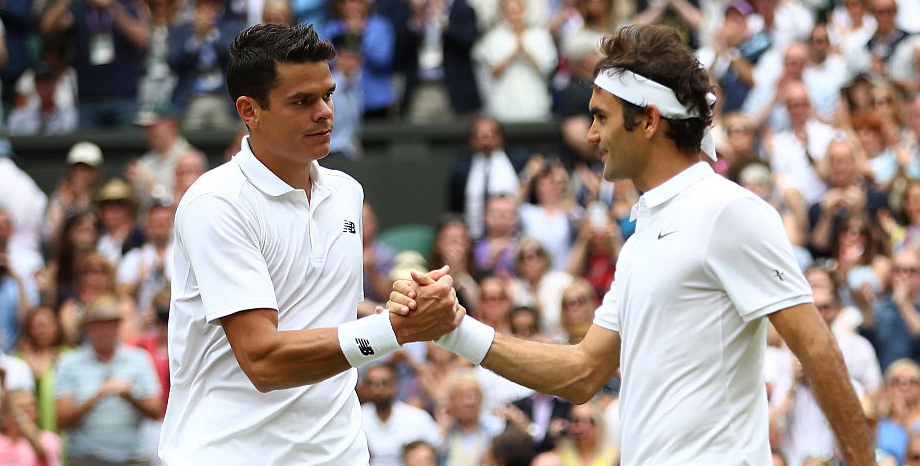 Raonic edged a five-set thriller 12 months ago to reach his first Grand Slam final and that result will give him confidence that he can cause another upset at odds of 16/5.

The Swiss star looks in much better shape this year, though, and we’re backing him at 10/1 to win in four sets in our Federer vs Raonic betting tips.

Roger on a roll

Federer continued his march through to the last eight with a straight-sets win over Grigor Dimitrov on Monday. He is yet to drop a set this year and took just 97 minutes to seal a 6-4 6-2 6-4 victory, highlighting why he is the 69/50 favourite in the outright betting.

Dimitrov, the 13th seed from Bulgaria, was supposed to provide a tough test for the third seed on Centre Court but Federer scarcely had to break into a sweat.

He now has the chance to gain revenge for last year’s defeat and believes he is in much better shape this time around.

“I feel like I’m rested enough. I can look at this quarter-final in a totally relaxed fashion,” he said after defeating Dimitrov.

“Physically, I’m not fighting anything like last year with my knee. I’m ready to go this afternoon if I have to, which is great, but I don’t have to. I think that’s a great bonus.”

That could take its toll physically but having won his last two meetings with Federer, we feel Raonic has enough about him to win at least one set and that is our final tip in the Federer vs Raonic odds at 31/50.

“Roger’s been the best player this year, hands down, when he’s been on court,” Raonic said. “But it’s not about six months or whatnot, it comes down to Wednesday, one day. So I’ve just got to try to find a way to try to be better on that day.

“I just feel like I’m still trying to find that rhythm that I had last year, playing a lot of matches consistently. It doesn’t mean it can’t come but I’ve just got to be sharp each and every point during the next match.”