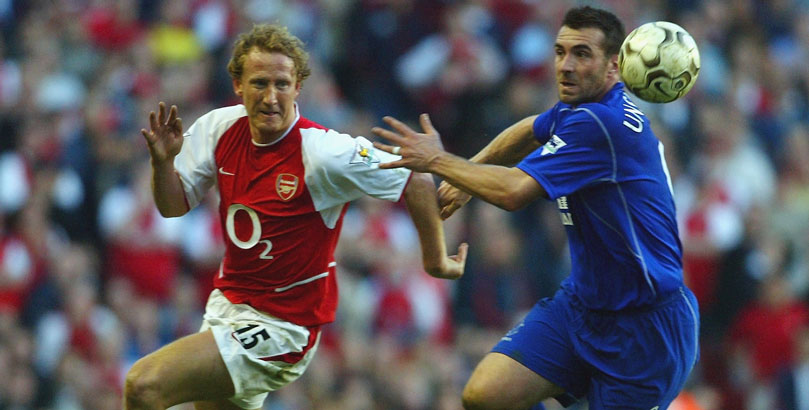 Nicknamed the ‘Romford Pele’, Parlour made 466 appearances for the Gunners, scoring 32 goals, including the opener in the 2002 FA Cup final victory over Chelsea. He was also capped 10 times by England.

In part two of his exclusive interview with bwin, the 45-year-old shares his thoughts on the 2018/19 Premier League season and former Middlesbrough team-mate Gareth Southgate’s spell as England coach.

What do you think will happen to Toby Alderweireld and Tottenham this summer?

Alderweireld is one of the best central defenders in the Premier League so it’s a really difficult situation for Tottenham. There will be a lot of clubs in the Premier League and abroad who will be interested. The situation is very similar to what Arsenal faced with Alexis Sanchez whereby the club can either cash in or keep the player and risk losing him for peanuts. Tottenham have lots of bills to pay with the new stadium so I think Alderweireld will leave the club this summer.

Do Tottenham need to win a trophy this season?

Tottenham need to decide if they’re a club who are happy to compete and put the pressure on, or if they want to take the next step and win silverware. [Mauricio] Pochettino always downplays the FA Cup, but that’s exactly the trophy that Tottenham should be aiming to win this season. The players will only get stronger once they’ve tasted that first trophy. The first trophy is always the hardest to win and they need to start having a winning mentality to achieve it. The progression has been there but now they need to go to the next level.

What do you think to Chelsea sacking Antonio Conte and replacing him with Maurizio Sarri?

It’s a strange decision to sack Conte, but I think it had become an inevitability. The surprise was that Conte came back for pre-season because the change should have happened sooner. Sarri is slightly a surprise choice because he’s never won a trophy, but he’s a good manager who plays good football. Chelsea have excellent players and will be competing for trophies this year, otherwise Sarri will be out the door and someone will be in to replace him. That’s just how modern football is at the top level.

What is going to happen with Eden Hazard and Thibaut Courtois?

It’s crucial Chelsea keep Hazard and Courtois this summer. I think Hazard is more important than the manager at Chelsea. They both had fantastic World Cups for Belgium and really put themselves in the shop window. It’s very difficult when clubs like Real Madrid come knocking on the door and it’s nearly impossible to fend them off. It won’t be Chelsea making the decision because all the power sits with Hazard and Courtois this summer. Hazard will be looking at the gap left behind by [Cristiano] Ronaldo and he’ll fancy himself to become the next big star in LaLiga.

Manchester City are struggling to improve on their squad this summer. Is this a unique challenge?

Manchester City are the team to beat again this season. It’s hard to see anyone else lifting the Premier League trophy because of the strength in depth the squad possesses. I think attention will have already shifted towards the Champions League. I think that’s what the owners really want because it’s the trophy missing from the cabinet and they could well win it this season.

Manchester City are struggling to improve their squad. They’ve signed [Riyad] Mahrez in a record deal, who’s a nice option to have but he’s unlikely to start every week. I think that’s why Fred and Jorginho chose Manchester United and Chelsea in the end because they saw first-team opportunities much easier to come by rather than risk sitting on the bench at the Etihad Stadium.

Liverpool have had a very busy transfer window. What do you think they could achieve this year?

Liverpool now have a really strong midfield with [Naby] Keita and Fabinho joining the squad for this season. [Virgil] Van Dijk was a huge signing who has instantly repaid the money splashed out on him. The big question is whether [Mohamed] Salah can score the same amount of goals as last year and what happens in goal. [Loris] Karius made those huge mistakes in the Champions League final and has looked shaky in pre-season too. I wouldn’t be at all surprised if there’s a new man between the posts this season.

You were with Gareth Southgate at Middlesbrough. Are you surprised he’s been so successful with England?

Gareth was a leader with a great football brain at Middlesbrough so I could always see him becoming a successful manager. He’s gone through the system, worked hard with the younger England squads and earned his opportunity to take the country to the World Cup. Gareth Southgate is the perfect manager for England and I think we saw that during the tournament. Southgate is a good guy and I hope he continues to succeed with England in the years ahead.

There’s so many positives around the England football team at the moment. Managing that expectation and increased pressure will be the challenge at the next European Championships because fans will suddenly be looking for semi-finals and finals.

Is Harry Kane fortunate that the positivity around England has taken attention away from his missed chances against Croatia?

Harry Kane had three unbelievable chances in quick succession to make it 2-0 against Croatia and I think we would have reached the final had he have scored, but we can’t blame him for backing himself to score instead of passing to [Raheem] Sterling. Harry Kane had every right to go for goal and unfortunately for us the goalkeeper made two big saves, but nine times out of 10 he would have found the net and we’d have been in the final. In the end, Croatia deserved to go through because [Luka] Modric and [Ivan] Rakitic used their big-game experience to take control and see them over the line. Harry Kane earned his spot in history as the golden boot winner at the World Cup.