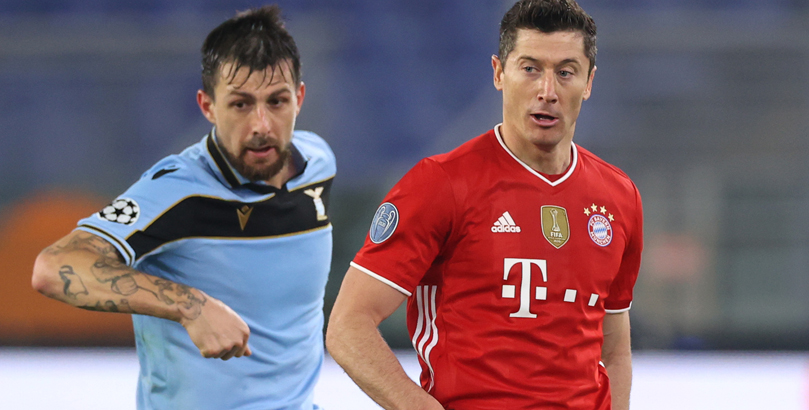 Bayern Munich aren’t going to give up their hold on the Champions League trophy lightly, judged on a 4-1 triumph away to Lazio three weeks ago.

Hansi Flick’s side have since gone on to secure a trio of entertaining Bundesliga victories, although they did fail to keep a clean sheet in any of those games either.

FC Hollywood to win and both teams to score was one of three successful selections for us in the first leg and we’re sticking with that at 29/20 for our opening Bayern Munich vs Lazio prediction.

Bayern were gifted an early lead in Rome when Robert Lewandowski pounced on a poor back pass and rounded Pepe Reina to score.

Teenage sensation Jamal Musiala, 17, then coolly slotted in a 24th-minute second and Leroy Sane made it 3-0 before the break following another defensive error.

A Francesco Acerbi own goal compounded Lazio’s misery, but they did pull one back via Joaquin Correa’s neat finish.

“Everyone fulfilled expectations,” Flick told UEFA. “We wanted to put them under pressure from the off, which we did well.

“We won the ball high up the pitch and created plenty of chances as a result. We’re very happy.”

Bayern followed up that comfortable triumph by going on a domestic scoring spree, netting 12 times in wins over Cologne, Borussia Dortmund and Werder Bremen.

In each of those matches, FC Hollywood struck their first goal between 15:01 and 30:00 minutes, so 9/4 they outscore their opponents in that period here appeals from the Bayern Munich vs Lazio odds.

A Look At Lazio’s Betting Odds

Lazio are only seventh in Serie A this season and simply looked out of their depth in the first leg,

“Bayern are probably the best team in the world, they definitely did not need our mistakes to make it even easier for them,” declared head coach Simone Inzaghi.

The Biancocelesti have at least now hit the target in all seven Champions League fixtures this term, though.

They showed both sides of their character in Friday’s 3-2 domestic defeat of basement dwellers Crotone.

Lazio led twice through goals from Sergej Milinkovic-Savic and Luis Alberto, but in the end needed a late Felipe Caicedo score to secure maximum points.

How the visitors will approach what seems a mission impossible is open to question, but we’re not expecting them to just throw the towel in.

Both sides are usually happy to attack from the outset and 14/5 for each team to score in the first half completes our Bayern Munich vs Lazio betting tips.

Real Madrid vs Atalanta: Draw in Spain is value option
Chelsea vs Atletico Madrid: Blues to shade it again
Author