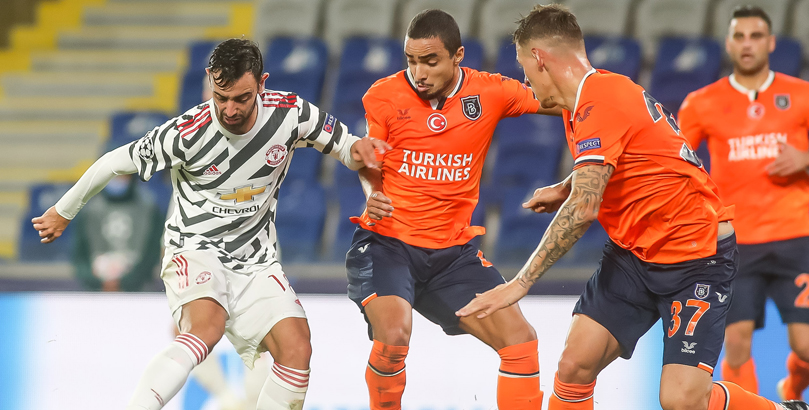 Manchester United undid much of their good early work in Champions League Group H when losing to Basaksehir in Istanbul and can’t afford another slip-up.

The Red Devils are having a topsy-turvy campaign in the Premier League too, but we’re not expecting lightning to strike twice against the Turkish team.

If Ole Gunnar Solskjaer’s side stay focused, 21/20 for a home win to nil could look a gift and that is our first Man Utd vs Istanbul Basaksehir prediction.

United upset PSG 2-1 in France on Matchday 1 and then produced a late flourish to thrash RB Leipzig 5-0 at Old Trafford, with Marcus Rashford hitting a hat-trick.

Such outstanding results made their defensive meltdown at Fatih Terim Stadium all the more surprising.

The Red Devils’ rearguard went missing altogether as Demba Ba was allowed to march clear unmarked on the break and slide his shot past Dean Henderson.

Another counter-attack then ended with Edin Visca in acres of space and he took full advantage with a clinical finish.

Anthony Martial pulled one back with a neat header from Luke Shaw’s excellent cross, but Basaksehir hung on for a memorable 2-1 triumph.

“This was a bad game, everything went wrong, we did everything wrong,” commented Bruno Fernandes on MUTV. “We can do much better.”

During Solskjaer’s eventful reign, United have shown an ability to put shocking displays behind them and the percentage pick is that they will put the record straight again here.

Looking at the Man Utd vs Istanbul Basaksehir odds, we like 29/4 for a smooth 3-0 success.

Basaksehir were the rank outsiders to progress when this pool was drawn out and did nothing to alter that in 2-0 losses to RB Leipzig and PSG.

However, stunning United has allowed head coach Okan Buruk to dare to dream of an unlikely place in the knockout stages.

“We gained confidence in the first two matches of the group and have improved after each,” he told the UEFA website.

“Getting the win in the third match gives us the chance to press for qualifying. We will work hard and we will try to catch the others.”

A gutsy man-of-the-match performance from ex-United defender Rafael epitomised the spirit shown in Istanbul, with the Brazilian repeatedly putting his body on the line to make tackles and block shots.

“It is hard for me to explain my feelings,” he said. “There is a tremendous joy in the dressing room. Winning against my former team makes it even more special for me.”

Rafael will again be fired up for an emotional return to Old Trafford, but we haven’t forgotten how Basaksehir were beaten 4-0 and 3-0 by Roma during the Europa League group stage last season.

They also lost 3-1 away to Sporting Lisbon and 3-0 to FC Copenhagen in Denmark during the knockout rounds, so this is not a team noted for travelling well.

Conceding early goals was an issue on those two road trips and in Leipzig this term.

Let’s add 12/5 for the Red Devils to lead after 15:00 minutes to our Man Utd vs Istanbul Basaksehir betting tips.

Rennes vs Chelsea: Blues can prove a cut above again
Liverpool vs Atalanta: Reds to overcome injuries
Author