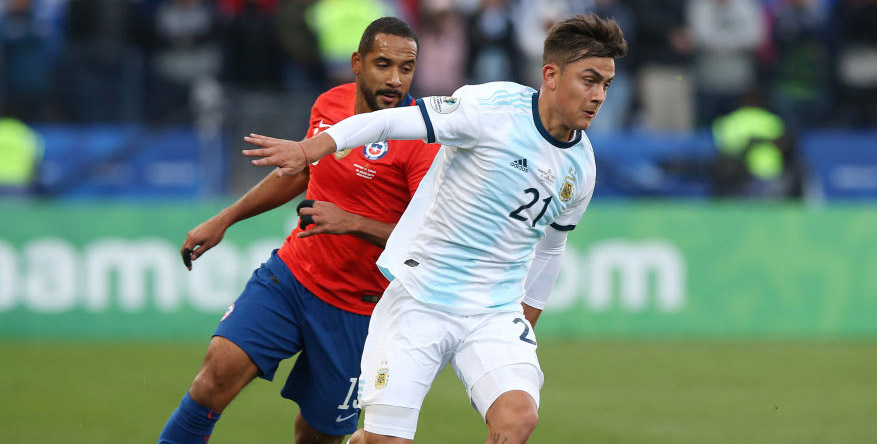 Argentina beat Chile in the third-place play-off at this summer’s Copa America and are again fancied to come out on top in Friday’s Los Angeles friendly.

In fact, La Albiceleste have prevailed in four of the last five meetings between these teams and have not lost to La Roja in normal time for eight encounters.

Both teams have left out some big names but Lionel Scaloni’s side can show they have the better strength in depth and 19/20 for them to oblige is our first Argentina vs Chile prediction.

A Look At Argentina’s Betting Odds

Lionel Messi, Sergio Aguero and Angel Di Maria are rested by Argentina, but that will allow some rising stars to push their claims for more game time.

Juventus playmaker Paulo Dybala will be keen to make an impression following a summer of transfer speculation and is joined up front by Lautaro Martinez of Inter Milan and Lazio’s Joaquin Correa.

The defence could feature Manchester City’s Nicolas Otamendi and Nicolas Tagliafico of Ajax, so there is still a very solid feel to this squad.

Argentina won six of nine friendlies in a 10-month build-up to Copa America, also drawing 0-0 with Colombia and only losing 1-0 to Brazil.

Five of those victories were to nil and 11/5 they prevail without conceding again appeals from the Argentina vs Chile odds.

Chile did manage to score in July’s Copa America bronze medal match in Sao Paulo, but only via an Arturo Vidal penalty after Aguero and Dybala had put Argentina in control.

La Roja had previously struggled up front against good teams during that tournament, drawing a blank in losses to Uruguay and Peru and drawing 0-0 with Colombia before progressing on penalties.

Vidal and Gary Medel are absent from this squad, along with three other defenders boasting over a century of international caps apiece.

Reinaldo Rueda has been left with a very inexperienced rearguard and we also fear Chile have limited quality in midfield.

Talismanic forward Alexis Sanchez has seen hardly any action since the Copa America, so Eduardo Vargas looks the main danger up front.

La Albiceleste are fancied to cope with that threat and 35/4 for them to oblige 2-0 completes our Argentina vs Chile betting tips.